Some very exciting news in the wire this week, a new species of pygmy seahorse! This brand new species, Hippocampus nalu, is native to the shallow waters of Sodwana Bay in South Africa. Why is this such big news?  This is the first pygmy seahorse living outside of the South East Asian/Coral Triangle region. Of the 7 other species of pygmies, 6 live in the Coral Triangle and 1 is endemic to Okinawa, Japan. 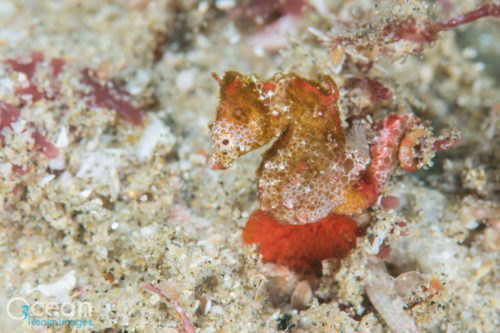 The discovery of this new species is very exciting for fish enthusiasts. It means there are likely more species of this tiny critter throughout the Indian Ocean. Scuba divers of the Indian Ocean basin, be on the lookout for the next one!  According to one of the lead authors and researchers of the study, Dr Richard Smith: “This diminutive fish is the first of its kind to be discovered anywhere in the Indian Ocean, let alone Africa. Its closest relatives live more than 8,000km away in Southeast Asia.”

An excerpt from the Press Release:

“Researchers, Drs Louw Claassens and Richard Smith visited Sodwana Bay in search of the fish in October 2018. The reefs of Sodwana Bay are exposed to the powerful swells of the Indian Ocean, very unlike the sheltered coral reefs of Southeast Asia where the other pygmy seahorses are found. A pair of seahorses was finally found along a rocky reef at 15m depth, grasping on to fronds of microscopic algae, amidst raging surge. The divers nearly lost the seahorses when a large oceanic swell almost buried them underneath a storm of sand. On one dive, they even found a tiny juvenile measuring just a centimeter in length. Two of these, tail to snout, would only just stretch across a US Nickel coin.

The scientific name of the Sodwana pygmy seahorse, Hippocampus nalu, means “hereitis” in the local Xhosa and Zulu languages to highlight that the species was there all along until its discovery. It hints at the vast number of potential other undiscovered species that live in Africa’s oceans. Additionally, ‘nalu’, also means “surging surf, wave”in Hawaiian, reflecting the habitat it lives in. Finally, the scientific name also refers to the middle name of the person who discovered and first brought the species to the attention of the researchers: Savannah Nalu Olivier.”

With the announcement of this exciting new species, we are happy to welcome one of the lead researchers Dr Richard Smith to our podcast.  Richard is a marine biologist who specialises in working with pygmy seahorses.  In fact, Richard’s PHD thesis is the first one focusing on these tiny, yet charismatic fish. Richard also has a fantastic new book “The World Beneath” about coral reefs and fish that can be found here.  Read more about our Live Show Podcasts on our Blog or subscribe to our YouTube and Facebook channels to be notified of upcoming guests.