Everyone loves a clownfish. Long known to almost everyone, clownfish received a huge boost in popularity after the release of “Finding Nemo”. Now you will be hard pressed to find anyone who doesn’t know what a “nemo” is. Of course the beautiful “Clown” Anemonefish is the species that is the most well known. However, it’s far from the only species in the ocean, did you know there are 30 different species? In Indonesia we can find 13 different types of anemone fish.

Known to live exclusively in anemones, clown fish are a species of damsel fish. Surprisingly enough, all but one are classified in the Amphriprion genus while the “spine cheek” has a genus all of it’s own, Premnas. They live in a wide variety of environments from coral reefs to sand flats. They all are born male and live in a matriarchal society within their home anemone, only the dominant fish is female. In an interesting twist, if the female dies, the largest male will then become female! They are found exclusively in the Indian and Pacific Oceans from the Red Sea to the Tuamotu (French Polynesia). They tend to feed on both zoo plankton as well as algae.

The species found in Indonesia are as follows Amphiprion akallopisos, chrysopterus, clarkii, ephippium, frenatus, melanopus, ocellaris, percula, perideraion, polymnus, sandaracinos, sebae, and Premnas biaculeatus. Several of the species look much like the other and are often hard to differentiate. For example, percula and ocellaris appear almost identical while sebae, and chrysopterus are both very similar to clarkii and difficult for most people to tell apart. Here we have photos of a few different species to help you differentiate between them: 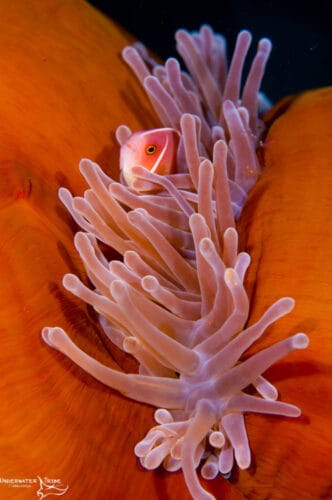 The Pink Anemonefish is quite possibly the most often encountered of the clown fish family in Indonesia. They are found in a variety of environments from shallow reefs to deep walls. They are normally found in magnificent anemones but also in leather and carpet anemones. It is one of the smaller species of clowns and is distinguished from the similar Skunk by the vertical bar behind it’s eye. 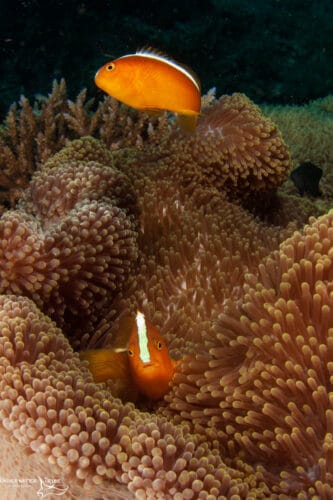 Similar in size to the Pink, the Skunk is seemingly not as populous in most areas of Indonesia. They are relatively uncommon compared to some of the others on most dive sites. They are easily distinguished from the Pink by the lack of a vertical line behind the eye. The white stripe along the body is very pronounced and starts at the upper lip. Skunks are normally associated with carpet anemones. 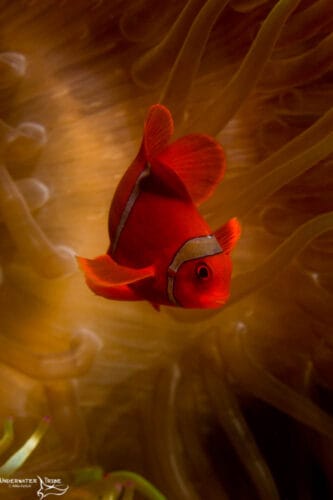 The only anemonefish that is not in the Amphiprion genus, the Spine Cheek is one of the larger species. This fish has its own genus due to the presence of a large spine situated just behind the eye. The smaller males are normally bright red while the larger females are a duller colour and may appear almost black. They are most commonly found in the bubble tip anemone, and they are the one species of clownfish that are most specialized in one species of anemone. This species is one of the more aggressive fish toward potential threats. 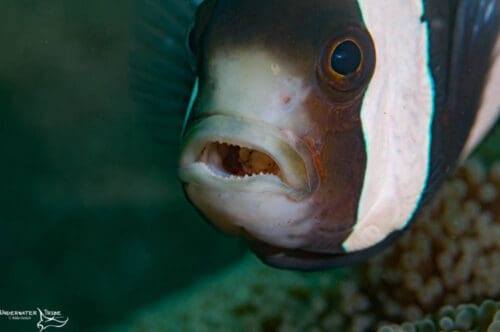 Also known as Panda anemonefish, these smaller species are commonly found in sandy areas. The two types of anemones that they normally associate with are known to grow on sand as opposed to coral. The Saddleback is a territorially aggressive fish that will protect its home from intruders large or small and even nips at divers that get too close. The male of this species is almost the same size as the female which is not the normal feature of anemonefish. Very common in Lembeh Strait, the vast majority of these anemone fish in the north Sulawesi are host to the tongue louse parasite. 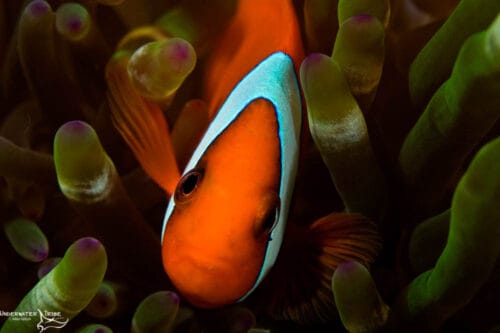 One of the smaller species, they are often found in very shallow water and are associated with bulb tipped anemones. They often create large colonies that are embedded within finger corals. The tomato clownfish can be either the frenatus or the melanopus, they are difficult to tell apart. They boast a beautiful bright red colour and are one of the more shy species. They are more prone to seek shelter within their anemone rather than to attack intruders. 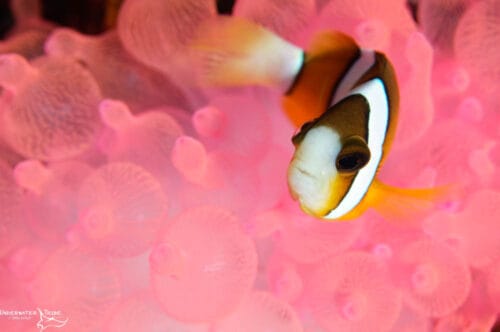 The most widespread of anemonefish, the Clark’s can be found from the Red Sea to the Tuamotu Islands of French Polynesia. It’s medium sized with the female reaching approximately 15cm in length. It has a large colour variety but is known for two wide strips on the body. It’s also the least specialized when it comes to hosts as it can be found in all of the anemone species that host clownfish. This species also has many similar species that are considered part of the Clarke umbrella and often mislabeled such as the sebae. In fact, this photo may actually be a sebae! 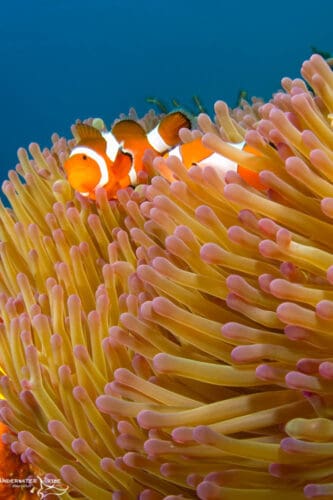 The most well known of the anemonefish is no doubt “nemo”. Nemo of the cartoon fame is most likely modeled after the ocellaris, however, it could also be the very closely related percula. They are one of the smaller species of clownfish and are found in 3 different species of anemone. False clownfish are found throughout Indonesia in a wide variety of habitats from shallow coral reefs to vertical walls and offshore pinnacles. They are typically shy and will seek shelter within the anemone when threatened, however, they are known to chase off competitors. This species is quite possibly the most photogenic species and is certainly the most commonly requested by visitors.

Clownfish are certainly a fun and interesting subject for photographers. With their bright colours and charm, they are always a great fallback subject when you can’t find anything else to shoot on the reef. They also exhibit a wonderful array of behaviour such as tending to their eggs and chasing off other fish. The Blue Planet II series featured a wonderful short of saddleback anemonefish utilizing a coconut shell to lay their eggs.