Triggerfish – Misunderstood Beauty of the Reef

One of the more controversial fish in the ocean is the iconic triggerfish. There are approximately 40 species of triggers spread throughout the tropical and sub tropical oceans of the world. Although a couple of species gain most of the attention when it comes to triggerfish, they really are a beautiful and diverse species found throughout Indonesia. Are these fish monsters as many divers think? Or are they a misunderstood and beautiful character on the reef? 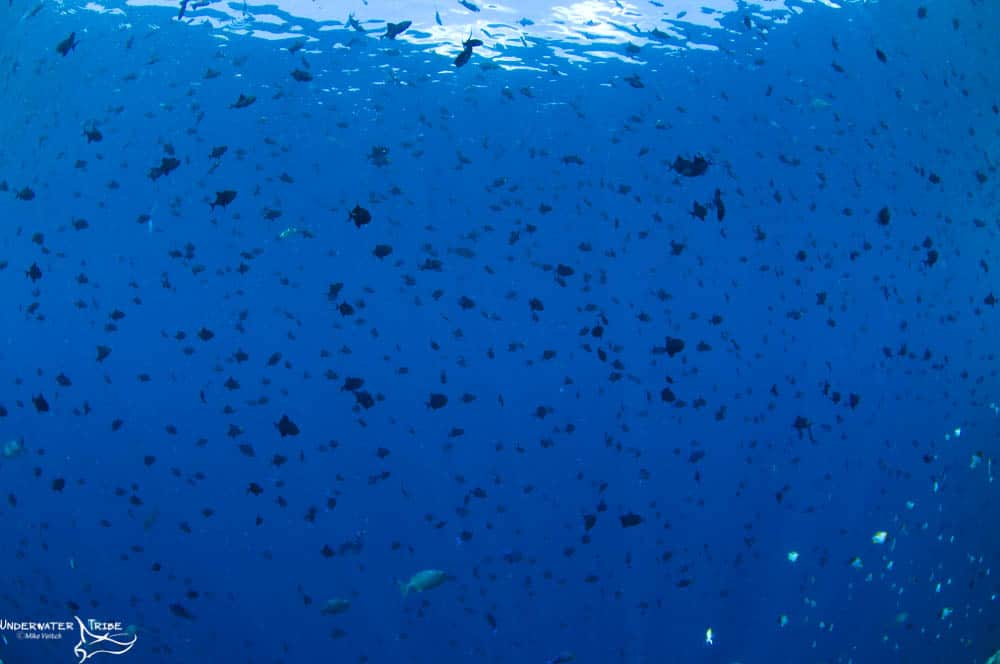 The first question that many people ask, why is it called “trigger?” This family of fish have a unique dorsal spine that pops up and locks in like a trigger. They utilize this unique trait when hiding in holes or under rocks. They swim face first into the hole and then “pop the trigger” which acts as a lock and makes it difficult for predators to pull them back out. This is why divers often see smaller triggerfish dart into the reef. It’s quite common to see hundreds of tails of the red tooth triggers sticking out of every available orifice on a wall dive. 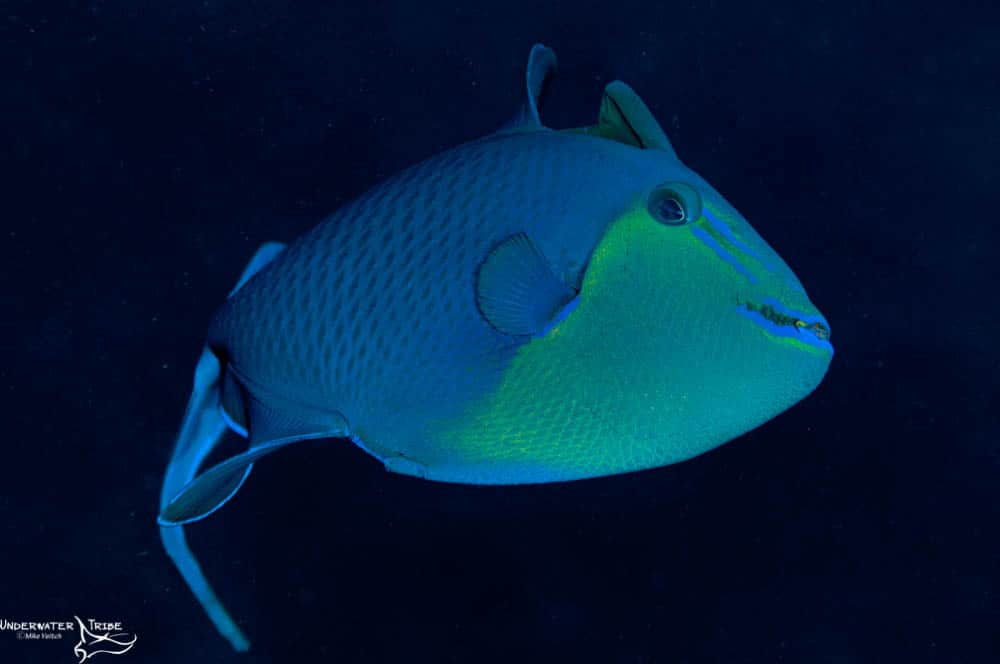 They come in a variety of sizes and colours. The largest triggerfish in the world is the stone triggerfish which measures up to 1 meter in length. However, this species is not found in the Indo Pacific area but rather is found in the eastern Pacific. The two largest species we find in the Indo Pacific are the Titan and the Yellow Margin. Each of these two reach about 60cm in length and are found in shallow waters throughout Indonesia. Other species commonly found in Indonesia are the aptly named red tooth trigger with it’s bright red canine teeth, black triggers, the clown trigger, orange lined, the reef trigger, and even oceanic triggers.

Triggers eat a mixed diet of both meat and plant based food. The larger species tend to eat mollusks and crustaceans which they crush with their large teeth. Some of the smaller species also feed on algae and plankton. It’s always an interesting encounter when spotting a trigger that is feeding. Watching these intelligent fish try to crack open a shell or a starfish is fascinating. Although many people are wary of approaching closely, when a titan trigger is feeding it’s not prone to attack. Watching it systematically tear apart a coral head to find its prey really shows the strength of its teeth and jaws. 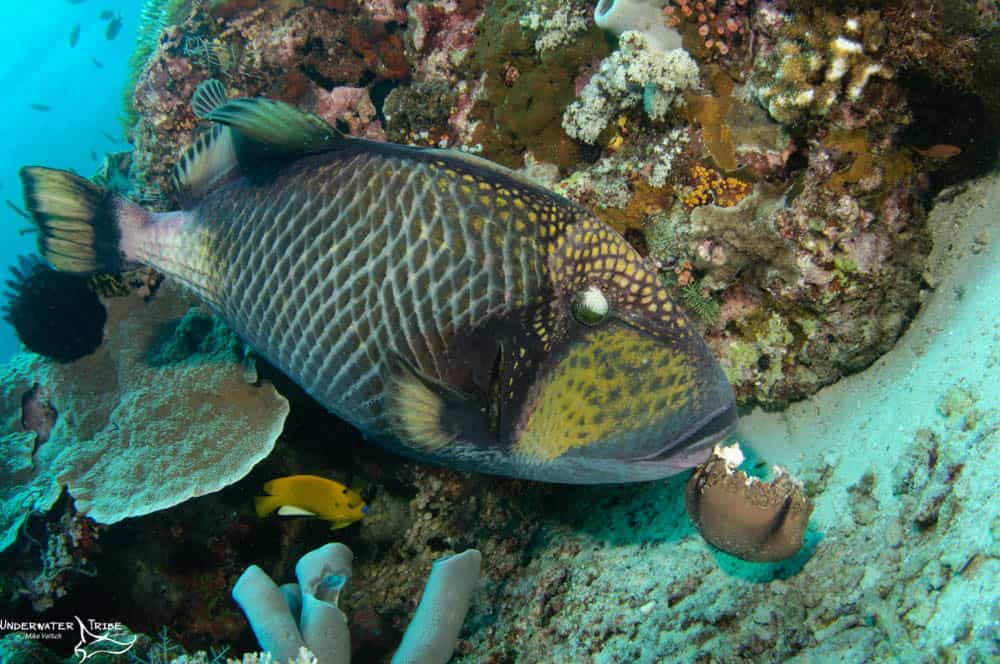 The Attack of the Triggerfish

Of course what everyone thinks about with triggerfish is their ability to attack. In truth, they only tend to attack, both other fish and people, when they are nesting. Everyone can understand the desire to protect their offspring can’t they? Both the males and females are highly protective of their egg mass. It’s not uncommon to see a triggerfish desperately chasing other fish around the reef. In fact, they will even charge larger animals such as turtles and sharks as well.

For scuba divers, it can be quite cute when a hand sized red tooth trigger charges you. However, it’s a whole new ball game when a football sized titan or yellow margin charges! These large and fast moving fish boast huge canine teeth and are known to take a nasty bite out of unwary divers. Although they normally break off their attack once the offender moves away from the nest, they will pursue over long distances at times. Almost every diver has a story about a triggerfish attack! 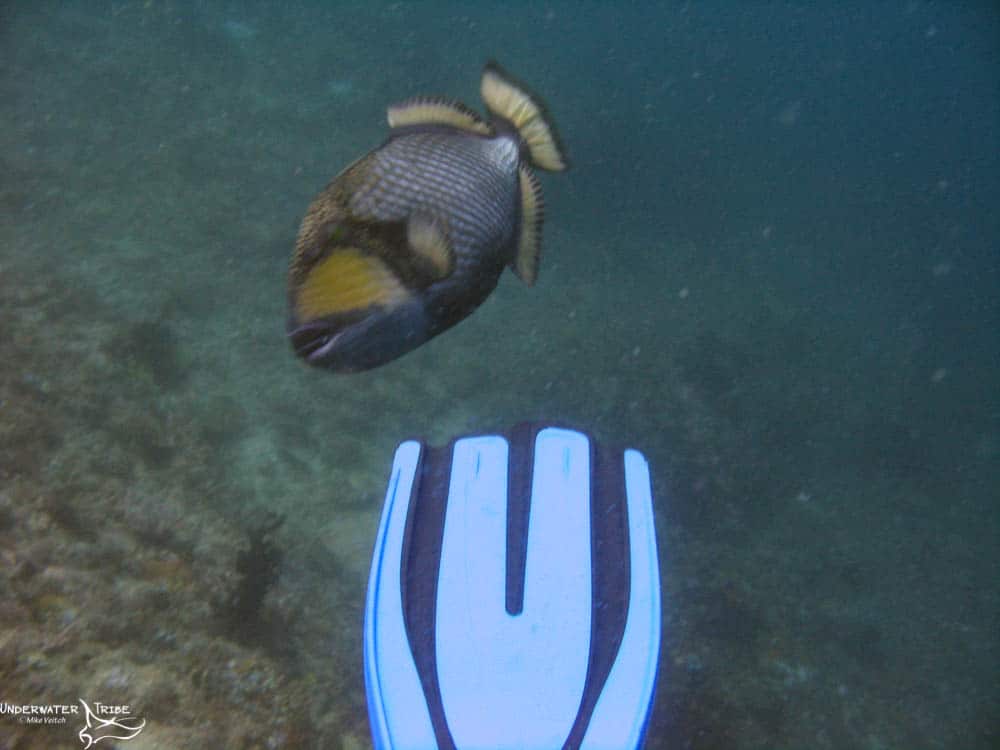 Do you have a triggerfish tale? There are several spots here in Bali where we regularly encounter them. Although they are mostly positive experiences we do encounter aggressive ones from time to time! The key is in the timing, most triggerfish mate and lay their eggs anywhere from 1 to 5 days before the full or new moon. Our guides are always aware of these fish on certain sites and will let you know if it’s mating season!

We think that the trigger suffers from a bad reputation. Often people only notice the titan and yellowmargins and instinctually shy away. This is understandable during the nesting season but is not necessary the rest of the time. The whole family are one of the most charismatic fish on the reef and often display very constructive behaviour. They are known to be one of the most intelligent of reef fish and certainly one of the most colourful. The next time you encounter one of these interesting fish, spend some time watching. We think you will be pleasantly surprised how industrious and intelligent they are!