Trevally – Overlooked King of the Reef

Oftentimes divers travel the world with a checklist of creatures they want to find. These lists consist of weird and wonderful animals such as blue ring octopus or hairy frogfish. For fans of larger marine life, their lists are geared toward sharks and marine mammals. However, one very charismatic fish is often overlooked by most divers. This fish is one of the most most proficient predators on the reef, the trevally! 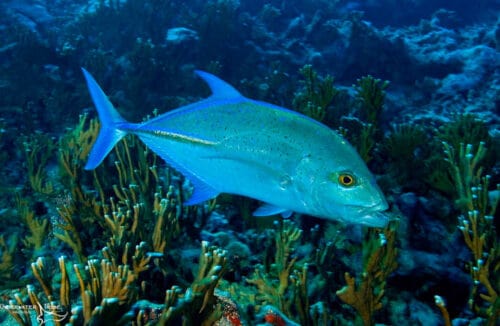 Trevally come in many shapes and sizes: from schooling big eye jacks to the large giant trevally. These fast moving fish are found throughout the world in a variety of environments. Although some are found in large, slow moving schools, they are most often found in smaller groups on shallow reefs.

For those divers among you who have been diving on busy reefs you have most likely encountered trevally. But, have you ever “heard” trevallies at work? These fish are super predators on the reef. They often work in conjunction with one another, even trevallies of different species, to herd smaller fish together into tight balls. They then attack in unison once a prey fish makes one wrong move. Have you ever heard the mysterious “boom” on the reef? This sound is made when all of the fish scatter at one time. This is due to trevallies making their move!

Black jacks are normally found in singles or pairs, blue fin trevally are commonly found in small to medium sized groups, big eyed jacks are normally found in large schools, but none of these are ever as impressive as even a single large giant trevally. These fish can reach over 5 feet in length and weigh over 100 pounds. If their sheer size is not intimidating enough, they swim around the reef with a confident swagger worthy of their place at the top of the food chain. They easily bully smaller fish and reef sharks out of the way when they are chasing down a meal.

On protected reefs such as Crystal Rock in Komodo or Blue Corner in Palau, these impressive fish truly run the show when it comes to feeding time. Slower reef sharks, groupers, and napoleons duly follow trevally around and try to capitalize on the frenzy of activity that hunting giant trevally create. 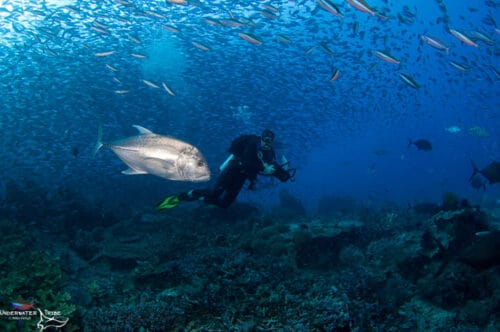 Although they are large fish, trevally are often difficult to photograph. This is due to two factors: the first being their reflective silvery surface and the second being their skittish nature. Although they are large and confident fish, they can be difficult for divers to approach. When they are in schools or in hunting mode it’s easier to get close to them. The best time to find hunting trevally is late in the afternoon or in areas of strong current such as channels or pinnacles.

When photographing them try turning down strobe power and try to achieve exposure with natural light. The lower strobe power can then act as a small amount of fill light to pop the colour but not wash out the silver. Even better than photography is video of these fish in action. Video can truly show how these incredible fish can hunt in a pack and really create havoc on the reef.

Have you ever heard the fish boom on the reef? Next time you do have a look around for trevally as they are most likely the ones responsible for it.