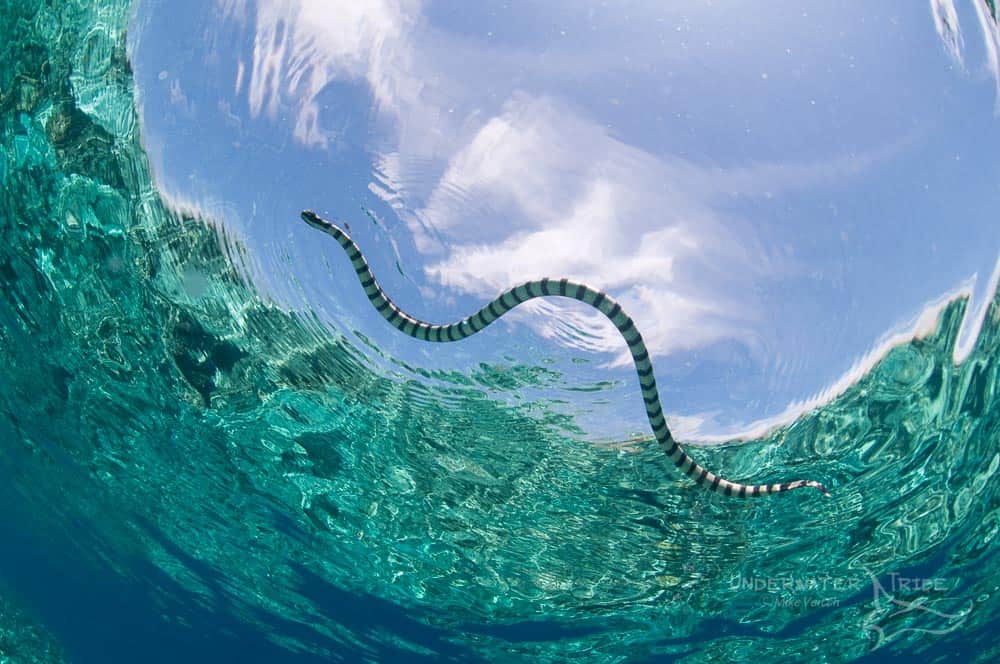 Sea snakes are one of the most misunderstood creatures found in the ocean. Many people have a well rooted fear of snakes on land and project this fear toward sea snakes as well. However, sea snakes are typically much calmer than their land based cousins and are mainly seen as having a gentle disposition. But they are  complicated family of animals and a few species are known to be more aggressive than others.

There are 69 known species of sea snake spread over a variety of generas. They are found mainly in the Pacific and Indian Oceans with none being known from the Atlantic. Sea snakes evolved in the Indo Pacific region and spread from there. The cold water in South America and Africa has prevented them from spreading into the Atlantic as they can’t survive in cold temperatures. The vast majority of sea snakes are highly venomous but there are a few species such as file snakes and turtle head snakes which lack venom.

Can They Live on Land? 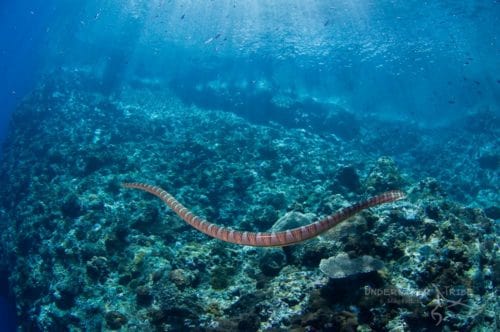 There are only 5 species of sea snakes that can truly survive on land. They are the 5 members of the Laticauda genus known as “sea kraits”. The sea kraits are a more primitive species that has not evolved as completely to marine life as the others. The kraits are the only species that lay eggs on land whereas the others all give birth to live young in the water. The scales of the kraits are not as adapted to the ocean as the others and therefore retain enough strength to move well on land.

One feature that all sea snakes feature is a well evolved paddle like tail that allows them to move well underwater. They are incredible breath holders and can stay underwater for hours at a time. They mostly live in the shallows but can be found as deep as 100 metres. The yellow bellied sea snake, Hydrophis platurus, is one example of a pelagic species that spends its live well offshore. There is little wonder that this particular species is the most wide spread of all, found from East Africa all the way to California.

Which Sea Snakes Can We Find in Indonesia? 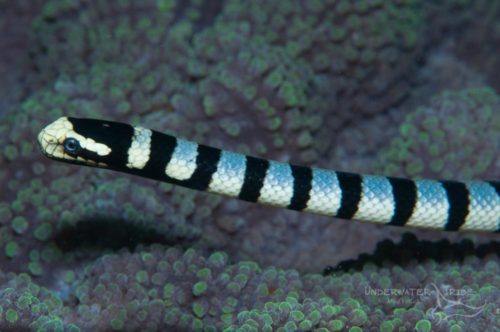 Although many of the species are known from Indonesia, we don’t actually encounter too many varieties. By far the most common sighting is the banded or yellow lipped sea krait, Laticauda colubrina. This familiar black and white snake is found throughout Indonesia and is a mild mannered species fond of feeding on moray eels and reef fish. Another common species is the Laticauda semifasciata, also known as the chinese sea snake or the black banded sea snake. This is the species that is found in large groups in the Banda Sea. Other species such as the olive sea snake are also regularly found in certain areas of the country.

However, the most unusual species is a type of file snake called the banded file snake, Acrochordus granulatus. This benign species is unusual for a sea snake due to the fact it doesn’t have venom. These snakes are in fact constrictors and strangle their prey before swallowing it. These unique snakes are found in brackish areas such as Secret Bay in Bali.


Will I See Sea Snakes While Diving? 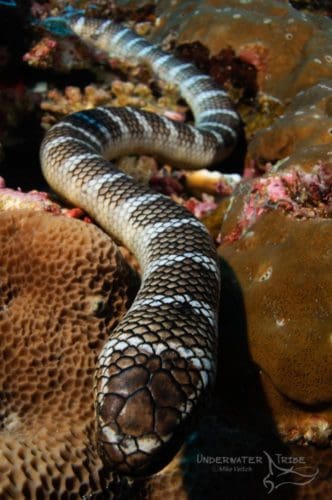 Although there is no guarantee, there is a very good chance of encountering snakes while diving in Indonesia. There is no reason to despair though. The common yellow lipped sea krait and the banded sea krait are very benign and calm. The yellow lipped sea krait is found throughout the country while the banded is more common in eastern Indonesia. They don’t mind the presence of divers and will go on with their normal activity of hunting while divers are around. Although they can hold their breath for hours, they will head up to breathe quite often and this is a wonderful to watch them swim.

Here in Bali we often see them on coral reef dives, especially in the Nusa Penida area. If you would like to spot one of these wonderful animals while diving in Bali, let our guides know and they will be sure to point one out. Although they may seem dangerous, they are actually docile and will allow divers and photographers to get close.