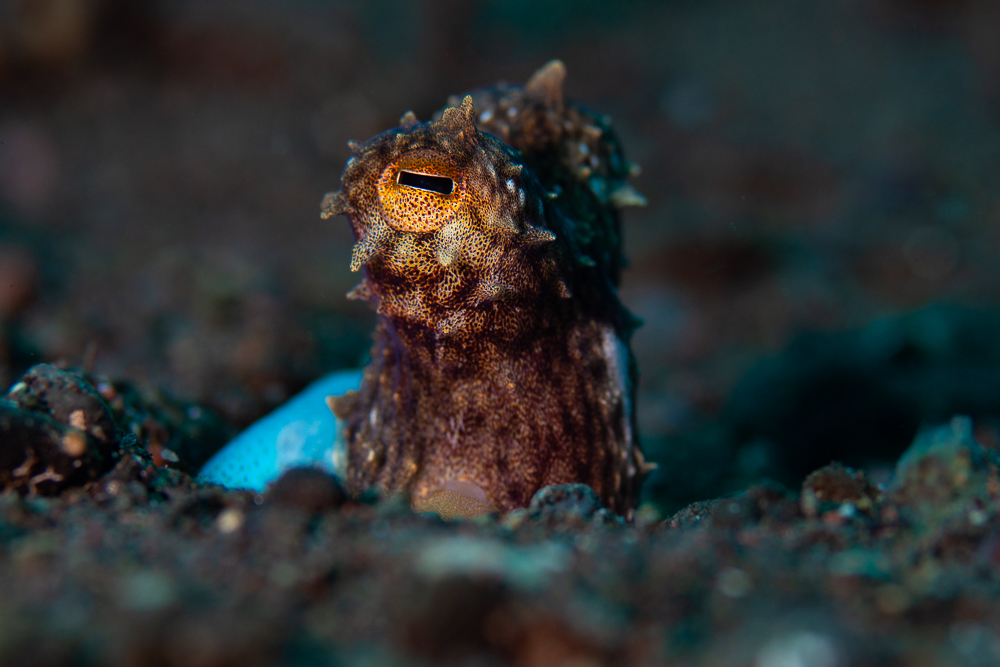 The long arm octopus is one of a handful of beautiful octopus that inhabit sandy areas in the tropics.  However, this commonly encountered cephalopod suffers a bit in the popularity department. The long arm is often overshadowed by the fame of it’s two more well known cousins: the wonderpus and the mimic octopus. The long arm octopus is commonly known as the White V octopus. However, it does not have an exact Latin name and is known as Abdopus sp.  Surely they are found often enough to merit their own name by now?

Where to Find the Long Arm Octopus?

Known for inhabiting sandy environments, this octopus can be found throughout the Indo Pacific region.  In fact, there is a closely related species that inhabits the Atlantic and Indian oceans as well (Macrotritopus defilippi). In Indonesia these charismatic octopi can be found throughout the country. Their typical habitat is mainly black sand slopes with mild current.  We have found them in Lembeh, Ambon, Sangeang, Bima, Manado, Halmahera, Sumbawa, Flores, and of course in Bali.  In fact, we have seen 20 different individuals in one dive at one of our favourite critter sites in Bali!

These are small octopus with very long arms, hence the name!  The head is usually only around 6cm in size, however, the arms can reach 15 cm in length.  They have a series of white spots on the body and a “V” shaped mark on the back of the head.  They are normally of a tan colour or a brownish red.  Unlike some of their more robust cousins, the long arm octopus is normally quite shy.  They are often found resting inside a small hole in the sand with only their head sticking out.

Getting close to a long arm octopus can be tricky as they will pull back inside the hole at the slightest hint of a threat.  However, when they do head out on a scouting mission or to hunt, they have an unmistakable movement.  Like their close relatives the mimic octopus, long arms cruise across the bottom with a tear drop shape. They are deceptively quick and utilize net hunting to capture their prey. 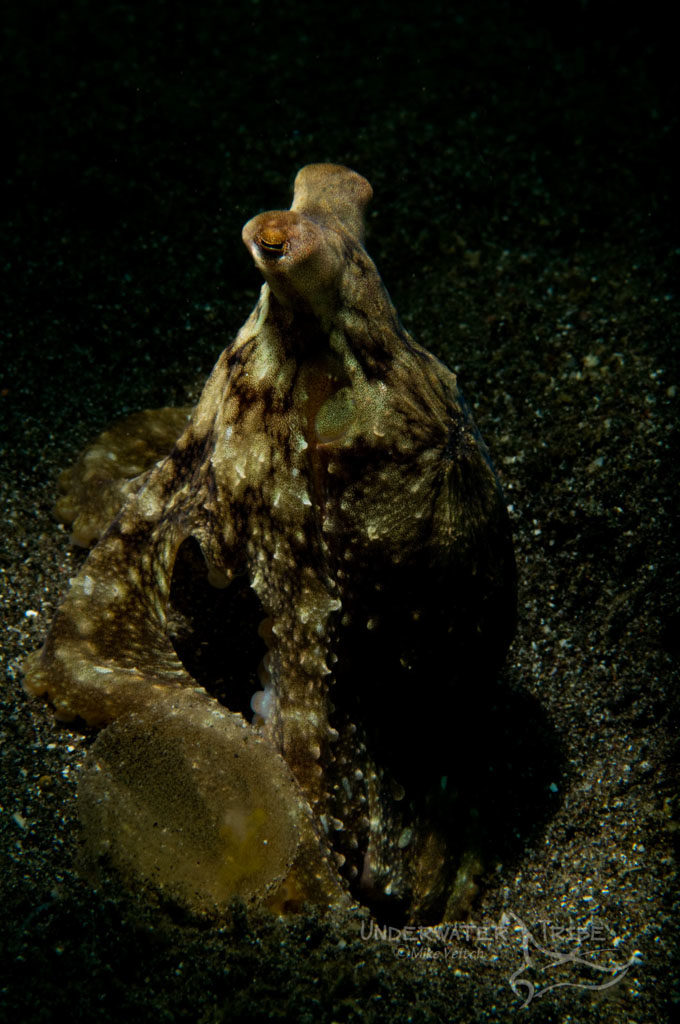 Will I Find Them Diving with the Underwater Tribe?

Like any underwater enthusiast, we are big fans of octopus.  Our guides are critter specialists who are always on the hunt for octopus. The north east region of Bali is especially rich in octopus encounters. The Tulamben, Seraya, and Amed areas, with their black sandy bottoms, are perfect octopus habitats.  In fact, we frequent a couple of sites in this area where we have found more long arm octopus than any other area in Indonesia.  These beautiful cephalopods are normally spotted during day dives but are also active at night.  However, they can be frustrating for photographers to capture. The best way to get close to them is to be patient, use slow movements, and incrementally move closer over several minutes.

If you would like to dive with these beautiful little octopi, please be sure to let us know when booking a trip. Have a look at our Bali Dive Sites page to understand a little bit more about what different areas have to offer.

Watch this short video to see a long arm octopus in action.