Everyone loves to encounter a shark. Well, lets bring that into context a little bit. Every scuba diver loves encountering sharks while diving. Although our non diving friends and family believe we are under constant threat, it’s actually not that common of an encounter. Many divers do hundreds of dives before finding their first shark. For many people, their first shark encounter is with one of the worlds most beautiful sharks, the grey reef. 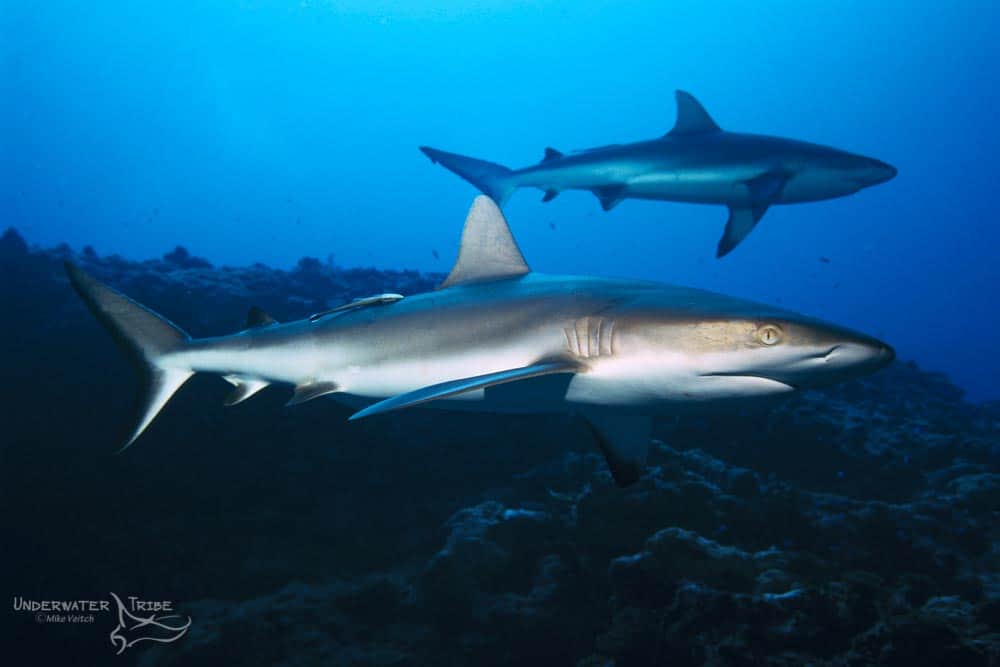 Grey reef sharks, Carcharhinus amblyrhynchos, are found throughout the Indo Pacific region. They are part of the requiem family of sharks which includes many classic looking sharks such as the silver tip, silky, and tiger shark. Measuring up to a maximum of about 2 meters, they are considered medium sized in the shark world. Greys are found throughout the Indian and Pacific Oceans, from South Africa to Easter Island. The name “reef shark” describes them perfectly, as they are typically found on the reef rather than in the open ocean.

Grey reef sharks are the dominant shark species in their chosen habitat. Although black tip and white tip reef sharks often live in the same areas, the greys are the alpha shark. They have a home range around a particular reef and don’t wander far other than looking for food. Grey reef sharks are one of the most common sharks encountered by divers. This is due to their tendency to enjoy the same things that divers are looking for! Simply stated, grey reefs love a rich reef with warm water that is teeming with fish! The big schools of fish that we enjoy as divers, sharks look at as a sunday buffet meal. 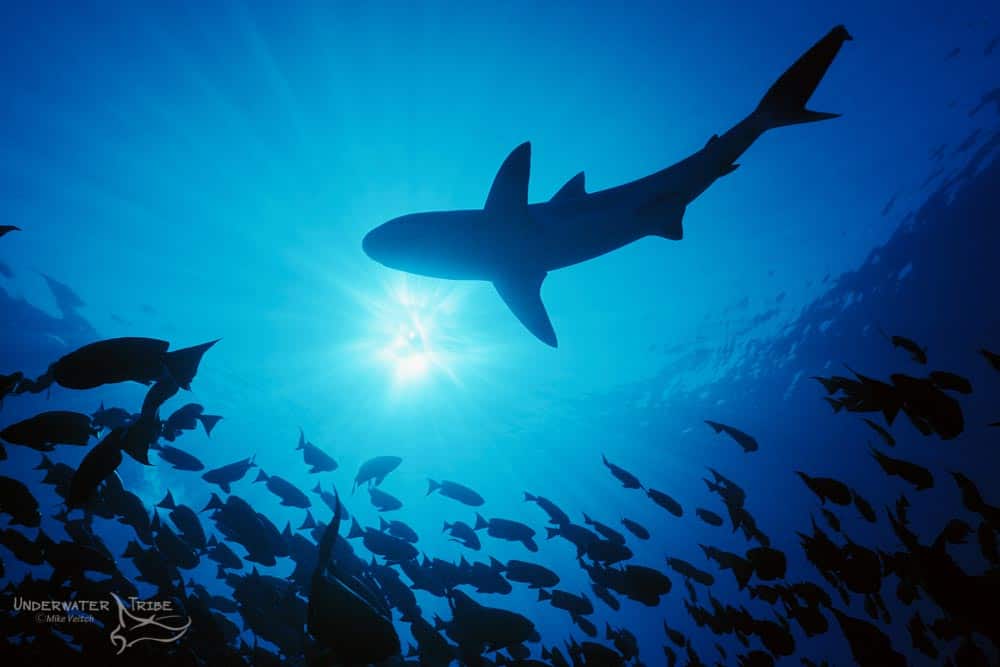 Where to Find Them

Reef sharks typically eat reef fish and invertebrates such as octopus and cuttlefish. As such, they tend to congregate in areas with a lot of fish. This means they can often be found on offshore pinnacles, channels, and “corners” along the reef. These are areas where current is present and therefore a larger density of fish life. The passes through the channels in the Tuamotu Islands of French Polynesia are perfect example of this. The channels boast large aggregations of reef fish and grey reef sharks are present in large numbers. Other famous destinations with large numbers of grey reefs also feature similar topography. 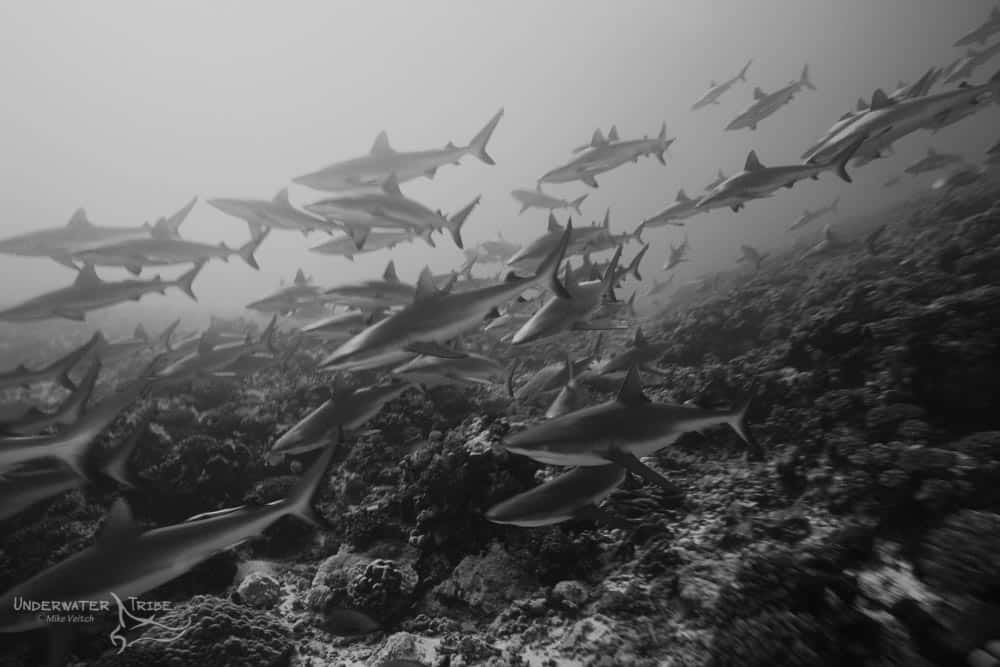 If you have ever encountered a shark during mating season, you have seen the scars present on their bodies. Requiem sharks tend to be violent when it comes time to mate. The males bite the dorsal fins of the females in order to pin them on the bottom. This often results in a lot of scarring on the sharks, sometimes shocking to look at. However, sharks are quite healers and the skin heals within a few weeks of months. It’s quite common to encounter reef sharks with obvious mating scars on them.

Like any large predator, encountering sharks takes a certain amount of calm thinking. Sharks don’t look at divers as a source of food but may see us as a potential competitor or threat. In most places where divers encounter humans, they are already used to divers and tend to ignore them. However, if you are lucky enough to explore a new destination these sharks can be curious and come close to check you out. Grey reefs may also exhibit a “threat display” when they feel threatened. This slow moving, crouched over swimming behavior is a sign to give the shark space. Although unlikely to happen, it’s good to know the signs of aggressive shark behavior. 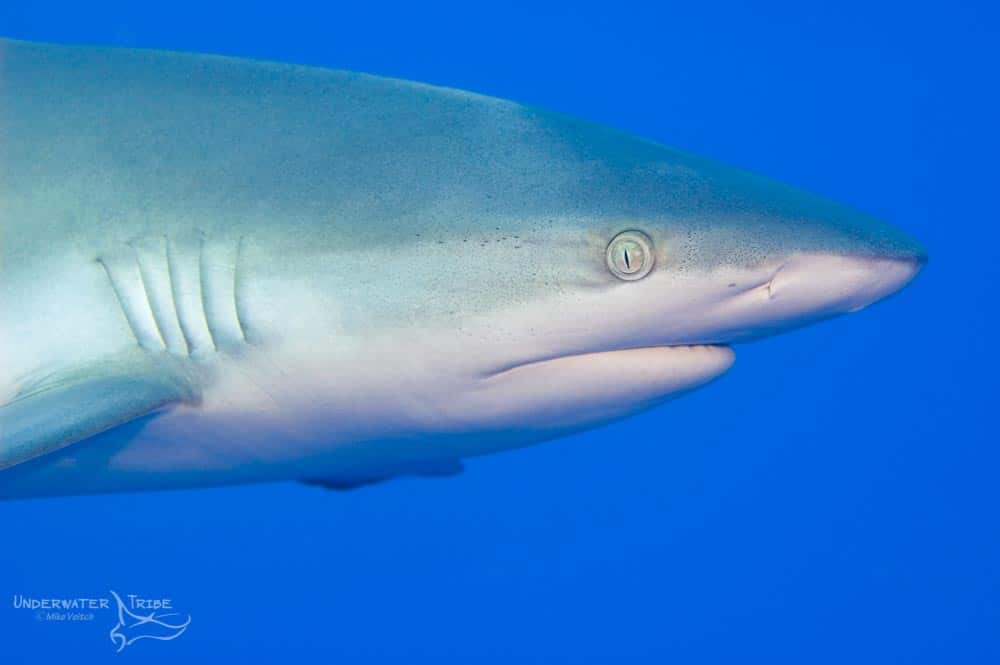 Photographing these sharks is not as easy as it seems. Getting close to sharks is never easy, they tend to like their personal space. Although many think that a wide angle lens is best for shooting sharks, this is not true. Sure, cage diving with a great white, swimming with a whale shark, or visiting “Tiger Beach” are venues where a wide angle lens is required. However, when it comes to smaller sharks such as greys or other reef sharks then a mid range zoom is preferred. 2 metres is typically about as close as you can get with these sharks (unless at a shark feed) so a mid range zoom will help fill the frame. Using strobes can help bring out the colour and shadows, but do keep in mind that strobes are only effective up to about 2 meters away.

In Indonesia, we encounter greys in a variety of destinations. Komodo, Flores, the Banda Sea, and Raja Ampat are some of the best destinations to see them. The Raja Ampat marine protected area is a perfect example of how shark populations recover once fishing is controlled. Shark fishermen almost wiped them out completely in the 1990s, however, once the area received protection in the 2000s the population is thriving. If you would like to see for yourself, then please join us on an amazing liveaboard trip to Raja Ampat in 2022. You can read all about this wonderful trip here: November 2022 Raja Ampat Liveaboard.