The Green Turtle, Chelonia mydas, can truly be described as an ancient mariner of the seas. These large sea turtles are one of the 7 species found throughout the world. Found throughout the Pacific, Atlantic, and Indian oceans, these air breathing reptiles are true international travelers. Green turtles are probably the second most common turtle that we encounter while diving in Indonesia. (Hawksbills are the most common) 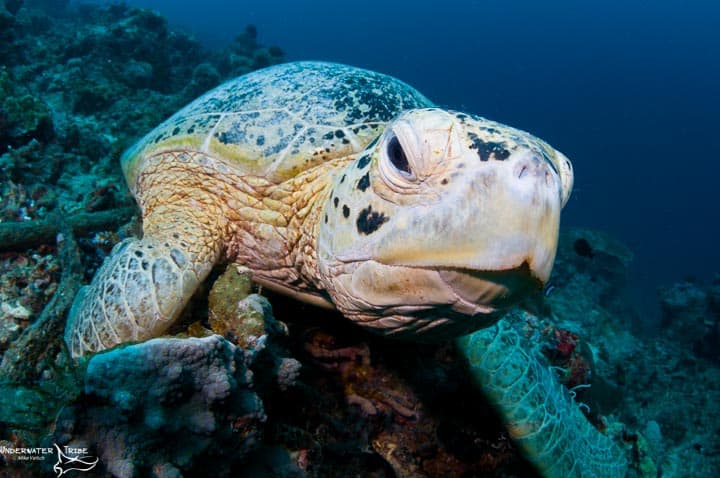 You would think the distinction of the name would be pretty easy! With a name like “green” one would think that the turtle itself is an obvious green colour. However, as everyone who has seen a green turtle knows, their colour is in fact different shades of brown and tan. In fact, the name actually comes from a much more sinister beginning. The term “green” actually refers to the colour of the meat of the turtle! This probably sounds horrible to many people reading this but for many people around the world turtles were (and in places still are) an important source of protein.

Green turtles are mainly vegetarians as adults, unlike some of their relatives that do eat meat such as the hawksbill. As juveniles they do eat other food including crustaceans, jellyfish, and even fish. They spend most of their days in seagrass areas grazing. They are an important part of the ecosystem as they keep seagrass beds healthy. Greens are one of the larger species of sea turtle and can reach up to 300kg and be over a metre in length!

How Do They Reproduce? 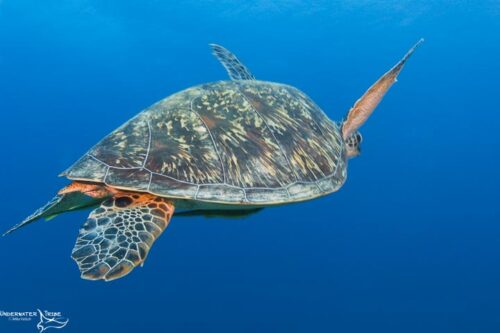 Like all species of sea turtle, green turtles lay eggs on sandy beaches. The females will drag themselves onto the beach in darkness and dig a hole with her back fins. Once the hole is to her liking she will then deposit 100 or more eggs and cover it with sand before returning to the water. She will do this 2 or more times per season every 2 to 4 years. The most amazing fact is that the female turtles will return to the beaches they were born in order to lay their eggs! This is especially impressive as they are known to travel thousands of kilometres in order to return. 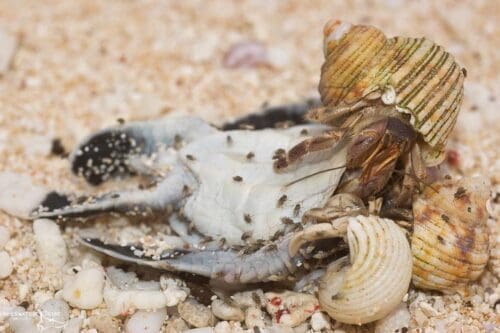 Eggs take approximately 50-70 days to hatch and the sex of the hatchlings depends on the temperature of the sand. The young typically emerge from the sand during darkness and make their way to the sea. They can differentiate which direction to go by the fact that the ocean is lighter than the dark land. This is why it’s important to protect turtle nesting sites worldwide. Bright lights from buildings often confuse hatchlings which results in them heading the wrong way and never making it to the ocean. The rush to the ocean is a very dangerous time for young turtles and many don’t survive due to predators. This includes birds, crabs and reptiles on land before ever making it to the water. Sadly only a small percentage of turtles make it to adulthood, that is why they lay so many eggs each season.

Green Turtles at Threat By Man

One of the main threats to all sea turtles is man. This is due to a variety of issues including direct hunting, habitat loss (nesting beaches), commercial fishing by-catch, and of course pollution. Everyone has probably seen photos and videos of turtles wrapped in plastic or choking on a straw. Thousands of turtles die every year by after encountering man made pollution. Even toxic runoff into the sea affects sea grass beds, a main source of their food. Luckily we can do something about this. We can reduce our use of plastics and of course stop throwing everything into the ocean. There is nothing more heartbreaking than seeing an otherwise perfectly healthy turtle dying to indirect human actions. Green turtles have been listed as a protected species by the IUCN since 1982 which has helped with their protection on a local level. However, they are still at threat and can use all the help they can get by animal lovers. You can contribute to this by supporting initiatives such as the WWF or more grass roots conservationists worldwide. Often your money will go further by supporting smaller, more specialized conservation groups.

Where Do We See Green Turtles in Indonesia? 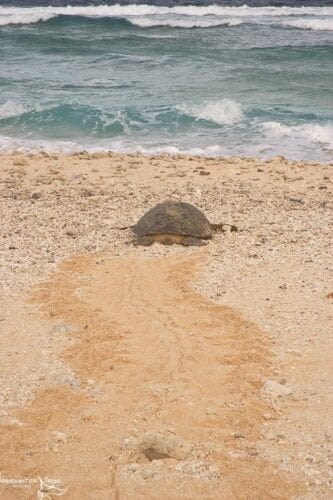 We are lucky in Indonesia to encounter this beautiful marine reptile quite often. We see them a lot in Bali while diving the reefs of Nusa Penida and Amed. Further afield we also find them in almost all of the popular diving destinations such as Raja Ampat. Some diving areas in Indonesia are especially well known for their green turtle populations. Sites such as Turtle Traffic in Maratua, Siaba Besar in Komodo, and the Gili Islands of Lombok are all famous for their green turtles.