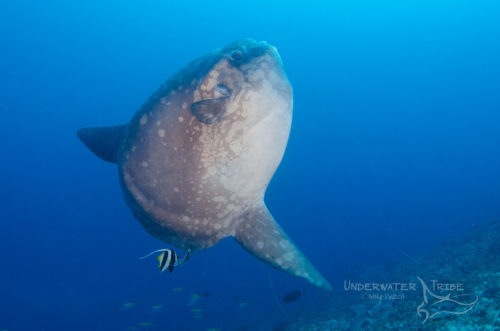 Nusa Penida is one of Bali’s most popular diving destinations. However, there are many misconceptions about what the island offers to scuba divers. In this article we discuss diving at Nusa Penida and what to expect.

We say “Nusa Penida” but for this article we use that term to refer to all three islands: Penida, Lembongan, and Ceningan. Nusa is an Indonesian word for “island”, all 3 islands in this archipelago are referred to as “Nusa”. Nusa Penida is the largest of the 3 islands and is separated from the other two by a 200 meter deep channel.  The islands are located approximately 12 nautical miles east of Bali, which takes approximately 45 minutes on a dive boat from Sanur.

The islands are home to a great variety of dive sites. Along the north coast of Nusa Penida are long coral reefs with steep slopes. Sites such as SD, PED, and Buyuk are drift dives along tropical coral reefs full of beautiful fish. These sites typically offer great visibility and warm water year round (but not always!) Although they may have strong current, these are usually one way currents without cross currents or down currents. These sites are often dived in the afternoons or when conditions aren’t right for diving in the channel or along the south coast. 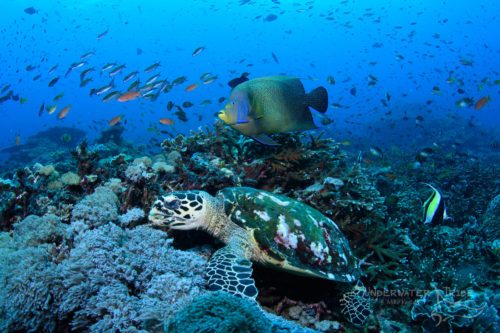 These sites are known for encounters with green and hawksbill turtles, sting rays, large schools of snappers and surgeon fish, as well as the occasional sighting of bigger marine life. What does bigger mean? Thresher sharks, sunfish, dolphins, and even whale sharks can be found when diving along the north coast.

The north coast is typically not as cold during the winter months (June to October) as the southern sites and the channel. It’s not uncommon to have a 19C dive at Manta Point followed by a 27C dive at SD, only a few miles away!

In and around the channel between Penida and Ceningan/Lembongan, lie some of the more famous sites. Blue Corner and Jack Point/Mangroves are located on the west and north west side of Lembongan. Blue Corner is an advanced, deep drift dive that often produces encounters with large life such as wobbegongs, marble rays, and sunfish. Due to the current often encountered at this site, including down currents, it needs to be done at the best time of tide. 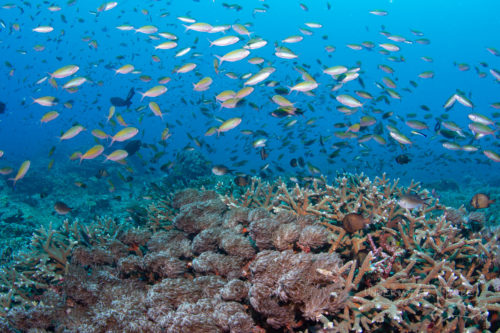 Toyapekah, Ceningan Wall, Gamat and Crystal Bay are the other popular sites in this area. Crystal Bay is the most famous of these due to frequent sightings of sunfish. All of these sites can experience current and are not suitable for novices unless under supervision in the best conditions. Marine life encounters include healthy hard corals, big schools of tropical fish, turtles, sharks, and of course sunfish.

The south coast of Nusa Penida is where the “monsters” are! The entire south coast is home to a large population of reef manta rays, which are present all year long. Sites such as Manta Point and Manta Bay are great for either snorkelers or divers. One thing to watch for in the south though is swell, this area can receive a large swell from the south. The visibility along the south coast is typically not as great as along the north coast, but there is mantas! 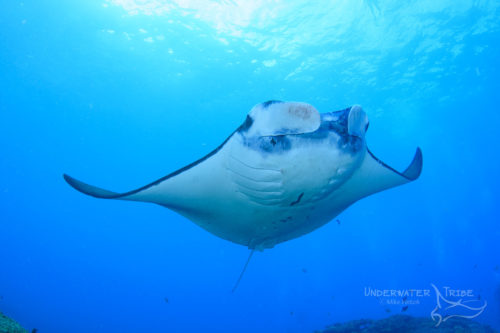 When To See What?

The diving around Nusa Penida and Lembongan can be broken down into two seasons: Mola Season and No Mola Season! Mola season is typically from around the end of June until the end of October. The peak period runs from late July to late September. At this time of year, the water can become much colder, especially along the south coast and into the channel area. Temperatures ranging from 19 – 23C are normal with 16C thermoclines nothing out of the ordinary. Sunfish are most commonly found when the water is colder, which is why June to October is their high season. The best sites to find them include Crystal Bay, the sites around Candidasa, Toyapekah, and Manta Point among others. The temperatures around the entire Penida area average 26 – 28C from December to April. 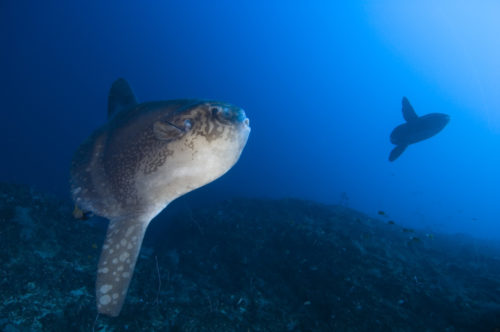 Of course weather will always play an integral role while diving in the area. South Bali is a well known surfing destination, which means waves! As the islands are open to the Indian Ocean, a large swell coming from the south will affect conditions. Therefore, it’s never guaranteed that the south sites such as Manta Point or Crystal Bay can be visited. On occasion, when the swell is large (June to September typically) then boats can be grounded all together. Do keep this in mind when visiting Bali, if the harbour is closed we switch to a Tulamben trip.

Interested in learning about other sites in Bali? Have a look at our Bali Dive Location page for more information.

The Nusa Penida area has been identified as an important Marine Protected Area. Learn more about it on the Coral Triangle Center page

Have a look at a short video from Manta Point