Batfish – Friendliest Fish in the Sea

The Batfish – Clowns of the Sea 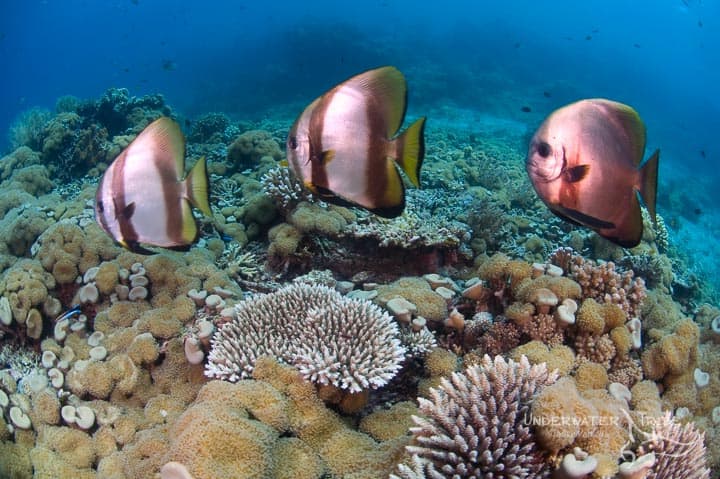 Have you ever wondered to yourself “What is the friendliest fish in the ocean?” Well, wonder no more! The answer to this question is actually quite obvious, it’s the ever so curious batfish. When I say batfish, I mean the Indo Pacific version, the Platax genus as opposed to the flat bottom dwelling fish. The batfish is also called a spadefish by some but it’s actually from a different genus than the Atlantic spadefish.

There are five species found in the Indo Pacific and they all share similar characteristics. The most distinct is obviously their “dinner plate” shape and silver/brown coloring. Some, such as the Platax teira are often found in large schools where as the Batavia is usually found alone or in pairs. They inhabit a number of different habitats including coral reefs, offshore pinnacles, sandy slopes, and everything in between.

One of the coolest things about these fish are the juveniles. All species of batfish have bizarre and flamboyant young that look nothing like the adults. The juveniles are often found hiding in coral avoiding predators but the orbicular tends to float at the surface near shore while resembling a floating leaf! Predators don’t often eat leaves so this is absolutely a very effective camouflage. The most famous of the juveniles is most likely the beautiful Pinnate species. These juveniles are almost pure black with a bright orange fringe around their body. This is thought to make them resemble poisonous flat worms to deter predators. The Batavia also has a striking form as a juvenile knows as the zebra batfish.

Most batfish eat algae from the reef as well as small crustaceans both on the bottom or in the water column. However, they also have a curious behavior when it comes to hanging out with green turtles. You see, the batfish are following the turtles for one very interesting reason, they eat turtle poop! Yes, it’s true, as adult green turtles mainly eat seagrass similar to batfish, the orbicular gets an easy to digest meal! This may or may not be the most bizarre form of symbiosis on the reef. 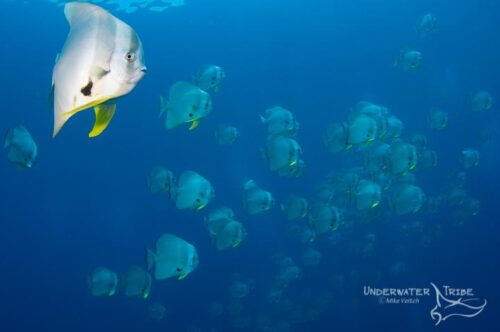 Batfish are very curious and typically inquisitive with divers. Popular dive sites such as wrecks are often known for resident fish. These residents will follow divers around during their dive and often play in the exhaust bubbles. I have even had batfish “gum” my fingers when I held out my hand. On reefs that are more seldomly dived, it’s not out of the ordinary for a batfish to check out divers. This behaviour is more common among the species that hang out in pairs or small groups rather than large schools.

Have you ever had a close up encounter with a batfish? Did it look like it wanted to be your friend? Have you had one follow you for extended periods on a dive? Or perhaps you even have a resident batfish on a local dive that you have even given a name to?! If so, let us know in the comments about your favorite batfish. If you would love to learn to take photographs of these funny characters then please let us know. We offer a range of photography courses in Bali which will expand your photographic knowledge.